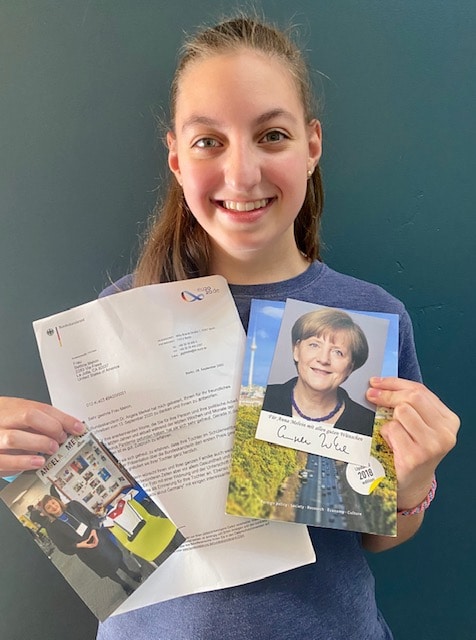 Every year, The Winston School Social Sciences Department hosts Bio Faire, which allows students to research historical figures and then give a presentation on what they’ve learned. Parents crowd into our school auditorium (pre-COVID-19) and navigate the room to learn about historical figures past and present that our students meticulously research.

Winston student Anna M. explored German Chancellor, Angela Merkel, for our 2019 Bio Faire and wrote her to share her presentation. To Anna’s great astonishment, Merkel replied and gave her a digital autograph. Anna says, “I received a 1-page reply that was signed by her assistant. The letter states that Frau Merkel was happy that I like her political work and that Germany is doing a good job managing the global pandemic. She congratulated me on my nice presentation.”

Angela Merkel was raised in communist East Germany. She is a scientist and holds a doctorate in physics. Frau Merkel was not interested in politics until the Berlin Wall fell in 1989. When East and West Germany became one country again, Frau Merkel felt that she wanted to help. The reunification process was not an easy one, especially for the East, where she came from. Public service became her life.

When asked why she chose this historical figure for her presentation, Anna says, “I chose Angela Merkel because she is the first female leader of Germany, and I am a German citizen. There are not many women in the world that lead a government. Angela Merkel was re-elected three times and has served as German Chancellor since 2005. She is a brilliant and strong woman and has gained lots of respect from other world leaders.”

Anna was very thankful to receive a response from this famous German leader and shares, “I feel blessed that I got an answer and that it was such a personal one.”